A flow on a graph

is an assignment to each edge of

of a direction and a non-negative integer (the flow in that edge) such that the flows into and out of each vertex agree.  A flow is nowhere zero if every edge is carrying a positive flow and (confusingly) it is a

-flow if the flows on each edge are all less than

.  Tutte conjectured that every bridgeless graph has a nowhere zero

-flow (so the possible flow values are

).  This is supposed to be a generalisation of the

-colour theorem.  Given a plane graph

and a proper colouring of its faces by

anticlockwise around each face of

.  Adding the flows in the obvious way gives a flow on

in which each edge has a total flow of

Seymour proved that every bridgeless graph has a nowhere zero

-flow.  Thomas Bloom and I worked this out at the blackboard, and I want to record the ideas here.  First, a folklore observation that a minimal counterexample

must be cubic and

-connected.  We will temporarily allow graphs to have loops and multiple edges.

We first show that

-edge-connected, else there is a bridge.  (If

is not even connected then look at a component.)  If it were only

If the new graph has a nowhere zero

-flow then so will the old one, as the flow in the bottom cross edge tells us how much flow is passing between the left and right blobs at the identified vertices and so the flow the we must put on the edge we contracted.  So

Next we show that

-regular.  A vertex of degree

forces a bridge; a vertex of degree

forces the incident edges to have equal flows, so the two edges can be regarded as one.  So suppose there is a vertex

of degree at least

We want to replace two edges

by a single edge

to obtain a smaller graph that is no easier to find a flow for.  The problem is that in doing so we might produce a bridge.

are connected by single edges in a forest-like fashion.  If any of the leaves of this forest contains only one neighbour of

then there is a

-edge-cut, so each leaf contains at least two neighbours of 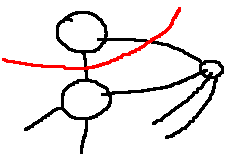 to be neighbours of

from different leaves of that component. 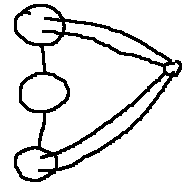 are disconnected from each other.  Now any such component

must contain at least

, else there is a

then we can choose

to be any two of them.  Otherwise all such

, in which case there must be at least two of them and we can choose

to be neighbours of

-connected then there is no flow between

-connected components, so one of the components is a smaller graph with no nowhere zero

is so small we can also find a 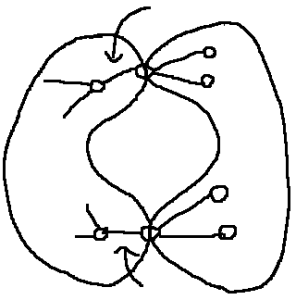 Finally, we want to get rid of any loops and multiple edges we might have introduced.  But loops make literally no interesting contribution to flows and double edges all look like

and the total flow on the pair just has to agree with the edges on either side.

Theorem. (Tutte) Given any integer flow of

that agrees with the original flow mod

.  (By definition, flows of

in one direction and

in the other direction agree mod

The engine of Seymour’s proof is the following observation.

-flow which is non-zero outside

for the set of edges added at the

th stage.  We assign flows to

in that order.  Assign a flow of

in an arbitrary direction to

; now the edges in

have non-zero flow and will never be touched again.  At the next stage, the edges in

there are only two possible values for these flows mod

.  So there is some choice of flow we can put on

to ensure that the flows on

are non-zero.  Keep going to obtain the desired

-flow, applying Tutte’s result as required to bring values back in range.

Finally, we claim that the

we are considering have the above form with

being a vertex disjoint union of cycles.  Then

-flow constructed above is a nowhere-zero

for the largest subgraph of

that can be obtained as above by adding cycles in turn, using at most two new edges at each stage.  Let

be a maximal collection of vertex disjoint cycles in

is empty.  If not, then the

are connected in a forest-like fashion; let

be one of the leaves. 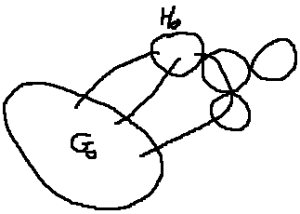 -connectedness there are three vertex disjoint paths from

. At most one of these paths travels through

be endpoints of two paths that do not.  These paths must in fact be single edges, as the only other way to get to

would be to travel through

-connected it contains a cycle through

, contradicting the choice of

Postscript. It turns out that Tutte’s result is far from magical; in fact its proof is exactly what it should be.  Obtain a directed graph

by forgetting about the magnitude of flow in each edge (if an edge contains zero flow then delete it).  We claim that every edge is in a directed cycle.

be the set of vertices that can reach

by following a directed path.  If

is not in any directed cycle then

are disjoint and there is no directed path from

.  But then there can be no flow in

, contradicting the definition of

, find a directed cycle containing one of those edges and push a flow of

through it in the opposite direction.  The total flow in edges with flow at least

strictly decreases, so we eventually obtain a